Download Prometheus. Extract the compressed TAR file and move the folder into another directory.

Change the prometheus.yml configuration file. At the bottom of the file is the scrape targets. Change the URL (and the port) to where the .NET application is going to be publishing its metrics. For example, if the .NET app is publishing to port 9934 using the KestrelMetricServer, then change the target to localhost:9934.

Start Prometheus by running the command:

Download Grafana and extract the compressed TAR file and move the folder into another directory.

Go to the Grafana folder and run the command:

Let’s assume that we have a .NET Core application. We can initialize Prometheus using the first three statements below. Assume that the .NET application is outputting some custom counters on localhost:9934. We also have some helper functions that will output data to a Prometheus counter.

We can get the metrics by going into Postman or Chrome and navigating to http://localhost:9934/metrics.

You can also get the metrics for Prometheus itself by using port 9090.

Now we will set up Grafana to display the metrics. In Chrome, go to localhost:3000. Use the credentials admin/admin.

Let’s add a new Prometheus data source to Grafana by navigating to http://localhost:3000/datasources

The URL for the data source should be http://localhost:9090.

Now we can find the metrics that our .NET application emitted. 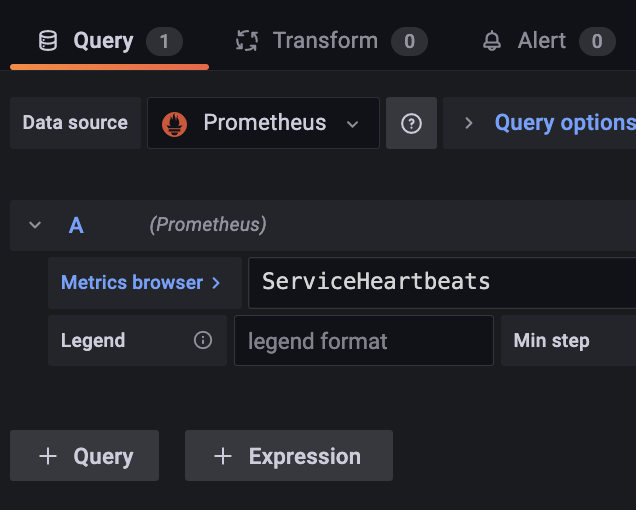 Here is a simple counter graphed with Grafana.

Instead of running Prometheus as a local process, we can load it into Docker and run it. The directions on DockerHub tell you how you can use your own prometheus.yml configuration file.

Important: Since the .NET application is not running inside of the same Docker container as Prometheus, in the prometheus.yml file, you need to substitute localhost with host.docker.internal.

Notice that, in the volume argument, you need to use the absolute pathname of the prometheus.yml source file.

To run Grafana as a Docker container: